Long toss distance pitching is one of the best ways to improve a pitcher’s speed. Long toss forces a pitcher to throw the ball as far as she can, while simultaneously using all her strength. The distance she throws is also directly correlated to her speed as you’ll see in the explanation below. We’ve had great success building pitchers’ speed using long toss. Check out the amazing speeds of some of our students in our speed club!

The pitcher should have had a good warm-up before beginning distance pitching. Prior to start of long distance pitching, the pitcher should do 10-20 High Toss Releases to herself  using a Spin Right Spinner and/or 14inch ball to help get the correct release point necessary for throwing maximum distance. The pitcher should engage her legs by bending her knees and lowering her pitching arm straight down, then launch the ball straight over her head as high as possible keeping the elbow extended, and using finger tips to spin the ball correctly.

Lay a 200-ft measuring tape on ground and have the pitcher stand at the 0 ft mark.  A catcher is not needed for this drill, however, a partner is helpful to call out distances.  The pitcher should arc the pitch high into the air with proper mechanics. Pitch 10 stationary fastballs (feet positioned on power line and no foot movement).   Next pitch 10 full motion regular pitches. Finish with 10 walk-into-pitches (start behind zero mark, take two steps, then stride from zero mark).  The catcher allows the ball to hit the ground and reads the exact distance where the ball first hit the ground. (Note: a 45 degree launch angle gets maximum distance). Record the distances of all 30 pitches. Circle the maximum distance for each category and be sure to beat her personal best next time. You can repeat with 5 riseballs from each position, but ONLY if your pitcher is already in the process of working on a rise ball.

Every 5 feet farther you can pitch the ball represents 1mph faster that you pitched the ball.  Compare your distances to the chart below to see the velocity you created:

In the video below, you will see a pitcher demonstrate the stationary, full motion, and walk into versions of the long toss drill. Notice the high arc of the ball’s trajectory as it travels toward her target in all three types of long toss.

Start at mound.  Take 3 big steps back and pitch several pitches.  Take 3 more big steps back and pitch a few more pitches. Repeat until you can no longer get the pitch to the plate in the air.  Stay at that distance for 15-20 pitches. Drive with your legs & lift with your fingertips to get the ball home with as little arc as possible.  For variation, you can throw to each corner for accuracy from long distances. Watch your tapeline as it flies thru the air to look for good spin.  Afterwards, work your way back toward the mound the same way you worked to back up (a few pitches at each distance) to get release point back to normal!!

For optimal results, try to incorporate distance pitching into your practice routine 2-3 times a week on non-consecutive days.

To also see the High Toss drill and Long-Distance pitching in action, check out our Speed Builders Series video and workbook! 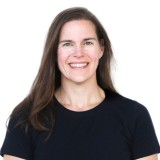